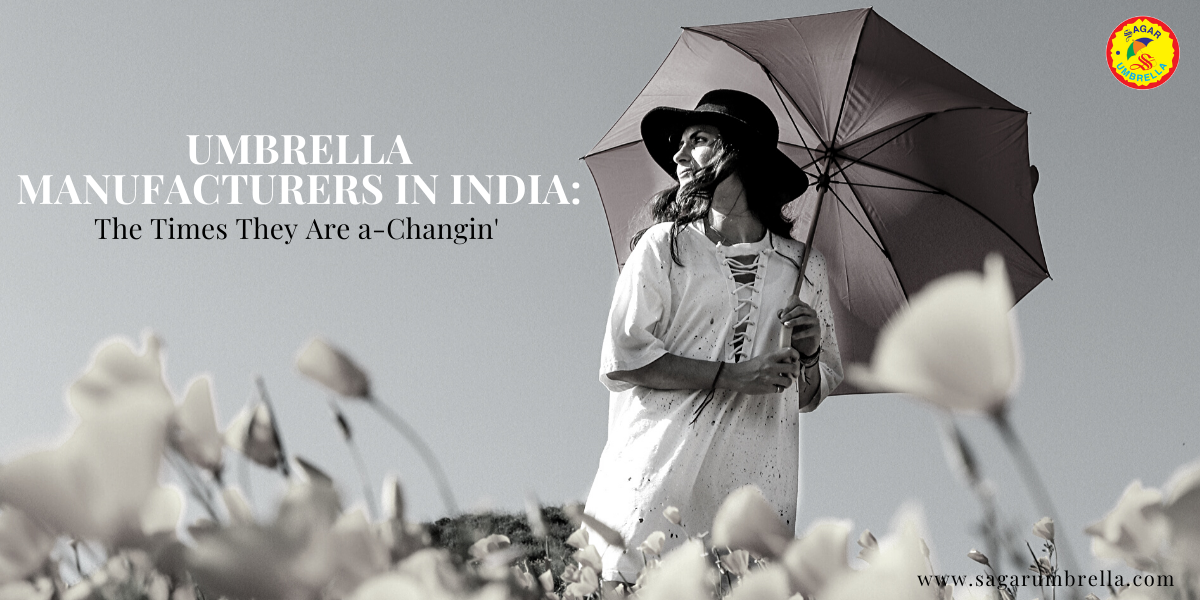 09 Jan Umbrella Manufacturers in India: The Times They Are a-Changin’

Umbrella is undoubtedly one of the most prominent accessories in recent times. However, if we probe a bit into history, we will come to know that the umbrellas are not just a passing trend of the millennial. The design of the very first umbrella can be traced back to 4000 years ago.

The status of the umbrellas was in fact, higher than what we see now. From being around the bourgeois families to become a useful object, necessary for everyone, the umbrellas have certainly carved their own legacy.

Umbrellas Across the Ages

The British eloped with the prestigious Kohinoor diamond, but they left behind the umbrella, bathed in the colonial glory. It was a time not long ago that the Bengali babus, with their oiled hair, parted neatly in the middle or towards either of the sides, wearing starched dhoti and punjabi, used to come out with their ubiquitous umbrellas.

Mohendra Dutt used to be a pakhawaj instrumentalist at the Bardhaman Raj Durbar in Bengal, who later emerged as the one credited for pioneering the umbrella manufacturing in India. Legend has it that once the umbrella adorning the throne was broken and in need of repairs. Then, Mohendra Dutt emerged like a saviour, repairing the umbrella, when the entire durbar was hesitant to send the umbrella for repairing back to England. He hardly knew that he was to be famous and it happened 25 years later, in the year 1909, after he inaugurated a small umbrella workshop, where he exhibited his creations in Dhubri, Assam.

Nevertheless, our good old umbrellas have transformed a great deal since then, and have now become a household accessory mandatory for most of us during the monsoons. Though the basic design of the umbrellas has remained the same across the decades, the style, colours, materials and the way of construction have transformed entirely. Sagar Umbrella is certainly one of the famed umbrella manufacturers of the present age.

Raincoats have certainly been the popular choice with the best raincoat manufacturers in Kolkata. The stylish raincoats Mens India, raincoat for ladies in India and transparent raincoats for womens, from the formidable umbrella manufacturing company would surely draw your attention. However, we all love to cling to our dependable umbrellas nonetheless.

So, hurry up and grab the latest deals on the umbrellas and raincoats of your choice!

Sorry, the comment form is closed at this time.